Cute/Monstrous: an exploration into the Fly 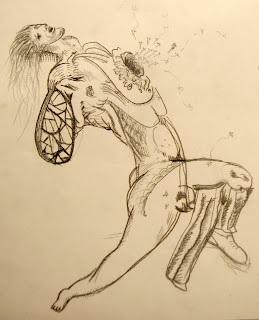 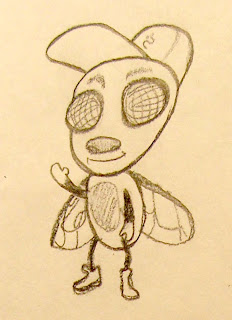 I have chosen the fly as my animal to research and create works with for the rest of the semester in Animals, People, and those in between. Each student is required to select an animal from Reaktion's animal series. The books offer a unique look into the lives of familiar, albeit misunderstood, animals. It was a hard choice between crocodiles, which feature prominently in my anxiety dreams, and flies, which I think are very beautiful when seen up close. I chose the fly because, well, they are such close partners to humans yet we rarely think of them as pets except for maybe Pigpen in "Peanuts" or that crazy character from "Midnight in the Garden of Good and Evil" who had flies on strings as companions. We consider them to be harbingers of disease, but really they are just moving our own germs between us. Long story short, I found them fascinating and close to home.
For our first assignment we had to portray our animal in two contrasting ways: monstrous and cute. For cute I used the principles of anthropomorphication to liken a fly to a child. I increased the size of the head, gave it humanesque hands with thumbs and a baseball cap and boots. A button nose, small smile, big eyes and a coy wave topped it off.
For the monstrous image I played more with the horror of a human body being decomposed by flies. When I was a child I found my neighbors dead cat in the woods behind my house. For a moment I believed the creature was still alive because the chest cavity was still in motion. That was when I noticed that the belly had burst open and maggots were roiling inside causing the carcass to undulate rhythmically. I immediately grasped my chest throat with the tips of my fingers pressing deep and hard into my skin, so as to cause pain and make me realize I was alive. But I couldn't help feel like I would eventually end up like that, one day I would be as that cat. The drawing I created focussed on overly defined form as a way to introduce darkness into the piece and also detail, thus keeping the viewers eyes moving. The human form has been warped and skewed to suggest internal changes due to internal decomposition. A hole has been placed in the chest from which flies are being born, quiet similar to our own birth except, flies seem to be born from death and decay which has likely added to there stigma. I even added the beginning of fly wings where the human arm should be to illustrate the change in domain and repurposing of the flesh.
Posted by Matt Richard at 2:39 PM 2 comments:

Elie Zananiri and I decided to make a fluid that would allow us to create liquid circuits. We tried many different combinations of the materials: water, oil, salt, powder graphite, and glue. The best combination was water, salt, and graphite, which resulted in a mixture that gave a steady reading of about 100 ohms. We used the liquid to create both a drawn circuit and an irrigation circuit.

A concern of mine for the developing world is how to deliver teaching materials. I had an idea for t-shirts that have information printed on them in a way that makes it viewable while being worn. This way the person could study randomly through out the day. The shirts could have printing on all 4 sides: front, back, inside front, inside back. Each side would have a different subject matter, perhaps mathematics, science, history, and art. The teachings would be designed for each specific area to which they were distributed.
Posted by Matt Richard at 4:07 PM 1 comment: