For my final in Nature of Code and Computational Cameras, I worked on creating an app that would allow users to take pictures of themselves or their friends. The image is scanned for a face. If a face is detected, simple rules of proportion are used to determine the basic location of the mouth. After the mouth is found, a script that mimics the look and feel of oral herpes is applied to that area of the picture. The resultant image is gross and funny. I also created another version that turns a portrait picture into a mugshot, includes criminal information and a lone teardrop tattoo. Recently I have been doing a lot of image augmentation. I think that it could prove to be very popular if I could only get it out to the masses. Further ideas include, fake family vacation pictures and fake historical pictures. It seems that everyone loves neat pictures of themselves, and frankly, they don't even have to be real. 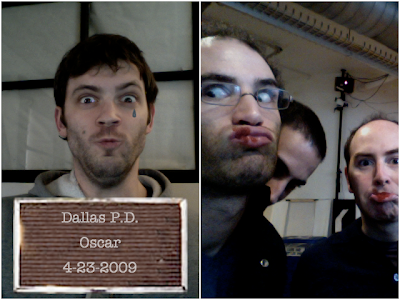